Two stars of Louisiana cooking which transcend all cuisines are eggplant and shrimp. Both are delicious and versatile and given that South Louisiana cooks love to stuff things, it’s no surprise that stuffed eggplant is a favorite. Talk about good…and the best part is that it’s not as difficult as it seems… here’s how to make Sweet Daddy D’s no-angst recipe for Shrimp Stuffed Eggplant. Prepare to be amazed!

Eggplant adapts well to the subtropical climate and fertile soil of South Louisiana.  For centuries, Cajun and Creole cooks have taken vegetables seriously, not treating them as a second thought. As a result, you’ll find eggplant prepared in countless ways in Creole, Cajun, Italian and all the other variations and amalgamations of the South Louisiana cuisines. Its versatility allows it to be used in appetizers, main dishes, side dishes and even in desserts.  Given the legendary bounty of Louisiana’s fresh and saltwater seafood, fresh Gulf shrimp are a natural partner for eggplant’s unique taste and texture. It’s common to see eggplant, and other local vegetables, hollowed out, the pulp being cooked with other vegetables, meats and seafood, then stuffed back in the shell, which is used as a vessel to carry all that goodness, just like a pirogue, the ubiquitous Cajun flat bottom boat, narrow like a canoe and used traditionally for trapping and fishing in the shallow bayous of South Louisiana.  If you see Eggplant Pirogues on the menu, get ready for a boat-load of goodness!! 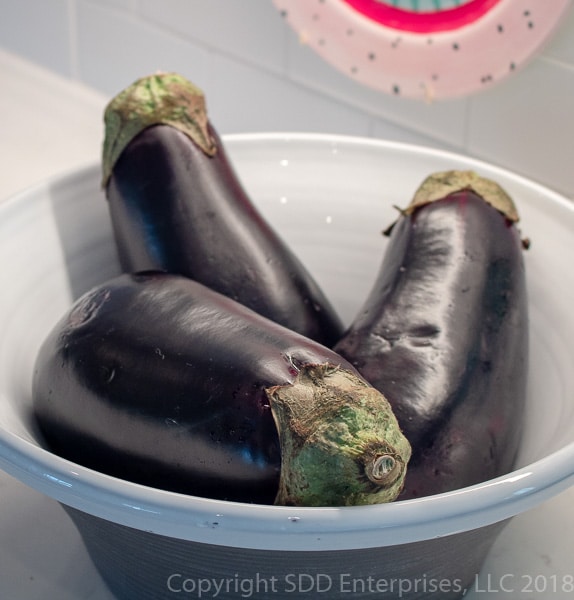 The purple eggplant that you find in most grocery stores are perfect-they are probably Globe Eggplant, also called American Eggplant, or their slightly smaller and thinner relative, the Italian Eggplant. Either is good and will match perfectly with some fresh (or frozen) Gulf Shrimp. You won’t need real large shrimp for this-some mediums or even small work very well in a stuffing. We’ll start out by sauteing the Trinity (yellow onions, bell peppers and celery) in some salted butter. The aromatics are provided by green onions and garlic along with a Herb and Spice Blend of oregano, basil, thyme, creole seasoning, kosher salt and ground black pepper and a couple of bay leaves. We’ll condense it all in some shrimp or seafood stock with a touch of Worcestershire sauce for a tangy pinch, then tighten it up with some Italian seasoned breadcrumbs. Couldn’t be much simpler, but don’t forget the beer. 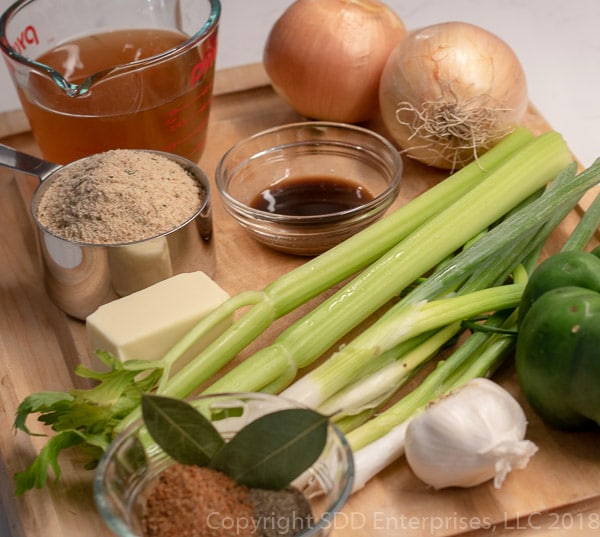 Here’s what you need

First…you have a beer.  At this point, the important steps of mise en place start with (a beer, and) having a good understanding and plan for getting this delicious dish put together. Pop a beer, then read the recipe thoroughly to make sure you understand it and have everything you’ll need…this is a major step in making this a no-angst affair. Chop the Trinity and place all in a bowl, then chop and measure everything else (but don’t get all anxious about exact measurements) and have them handy in their own little vessels. Make sure you peel, devein and rinse the shrimp, then pat them dry with paper towels-take ¾ of the shrimp and give them a rough chop, leaving the rest whole. Mix in a generous sprinkle of creole seasoning and set them aside until you need them. Combine all the ingredients for the Herb and Spice Blend and set that aside. 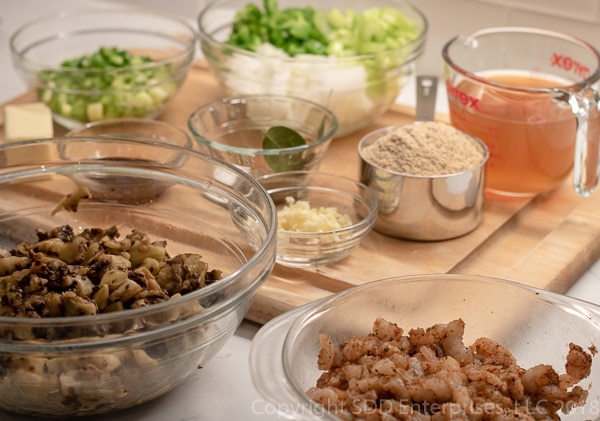 You’ll want to scoop out the pulp and leave a shell to hold the stuffing-we use the entire eggplant for this recipe! There are a few ways to do this (see the Hints and Tips below)…I usually slice the eggplant in half lengthwise, score the meat in a crosshatch pattern with a paring knife… 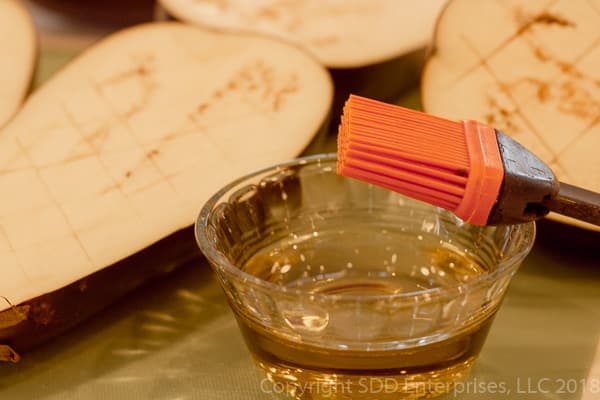 brush on a little olive oil, place them face down on a baking rack and stick them in a 400-degree oven for about 40 minutes. 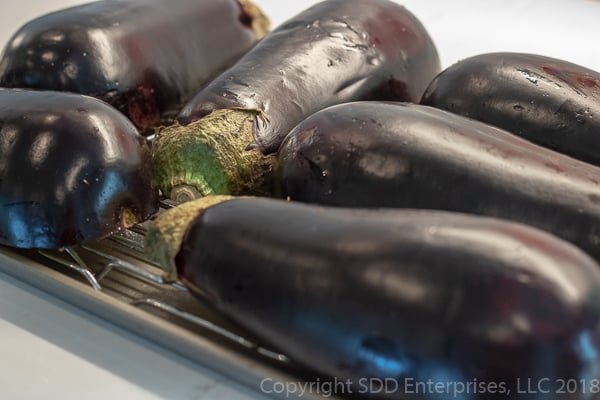 Face down on an backing rack

If the pulp is soft when probed with a fork or a toothpick, they’re done. Let them cool, then scoop out the meat with a spoon or a melon baller, leaving a hollowed out eggplant like a little pirogue. Give the eggplant pulp a rough chop and set it aside. 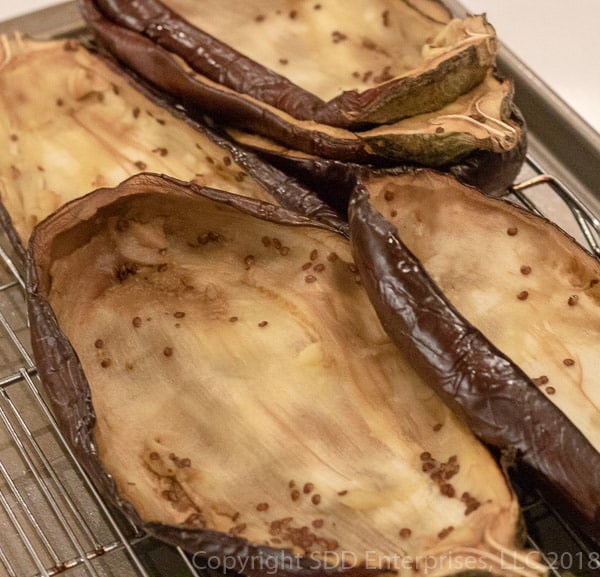 Saute the Trinity and other seasonings

Place a dutch oven over medium-high heat, add the butter and when it’s bubbly, throw in the trinity (onions, bell peppers and celery) and saute until beginning to caramelize; about 8 to 10 minutes. Add the garlic and green onions and saute until aromatic, about 2 minutes, then mix in about half of the Herb and Spice Blend and the bay leaves and continue to saute about another 2 minutes. This should be smelling really good at this point. 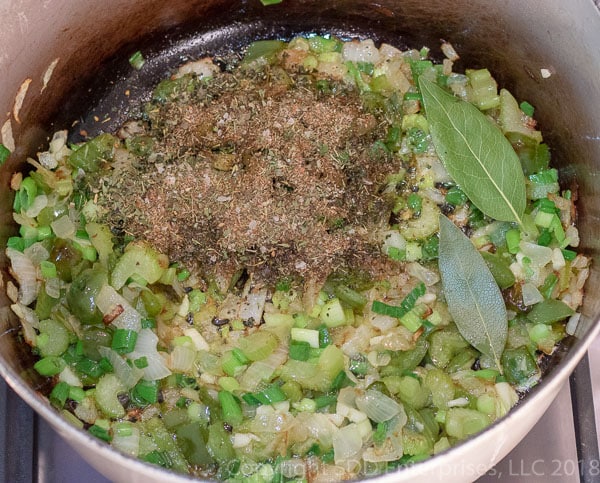 Saute the Trinity, then add the aromatics

Add in the eggplant

Now it’s time to add in the eggplant. Mix it in very well, reduce the heat to medium and let it start to smother down, cover the dutch oven but stir occasionally so it does not stick. The eggplant will start releasing its liquid. After about 10 to 15 minutes, add the Worcestershire sauce and the seafood stock, uncover and simmer for another 15 to 20 minutes until the stock has reduced and the eggplant is very soft and mash-able. The amount of time this will take will depend on how much, if any, the eggplant was cooked when you scooped it out. Just make sure that it’s nice and soft and mushy so you don’t have any tough parts when you serve. 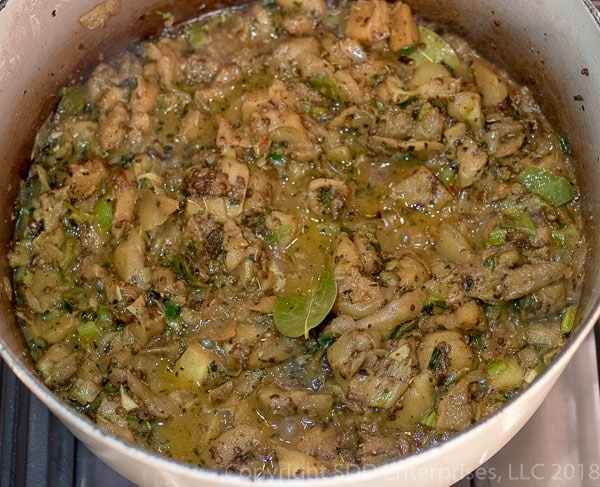 Add in the shrimp and breadcrumbs

I usually add the shrimp by hand, a few at a time, mixing everything well before adding more shrimp. When you have them all in there, continue to saute, uncovered, until the shrimp start to turn pink, which will be about 5 to 10 minutes. Add in the rest of the Herb and Spice Blend and give it a good stir to make sure everything is mixed well. Add in the breadcrumbs, starting with about half and adding more until you have the consistency of stuffing or a filling-sort of sticky. Remove the dutch oven from the heat, cover and let it sit for about 10 minutes.  You’ll want the stuffing to cool a bit before stuffing the shells so after 10 minutes, remove the lid to allow the eggplant to cool; remove the bay leaves. This should take at least 15 minutes, but take as long as you need. 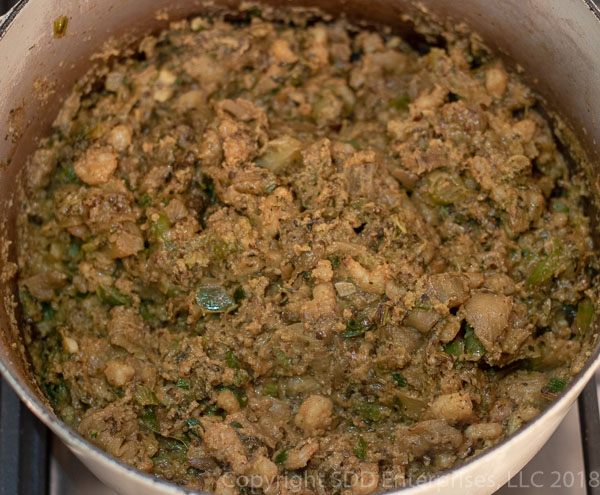 Add in the shrimp and the breadcrumbs

Using a spatula or wooden spoon, stuff the eggplant mixture into the eggplant halves, pushing to fill all the voids until the shells are full. 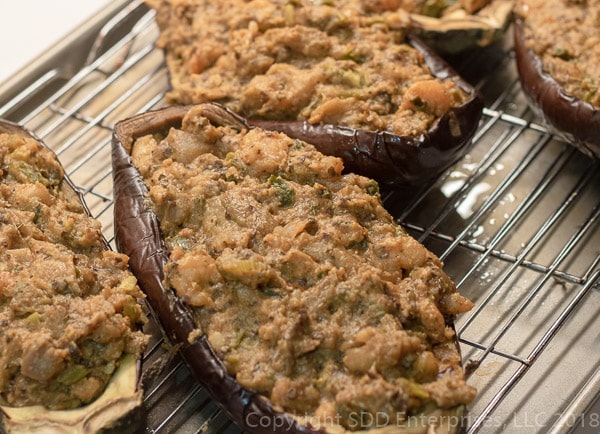 You may not have enough filling for all the eggplant shells, but once all the filling has been used, sprinkle some bread crumbs on top and place 2 or 3 small tabs of butter on top of each. 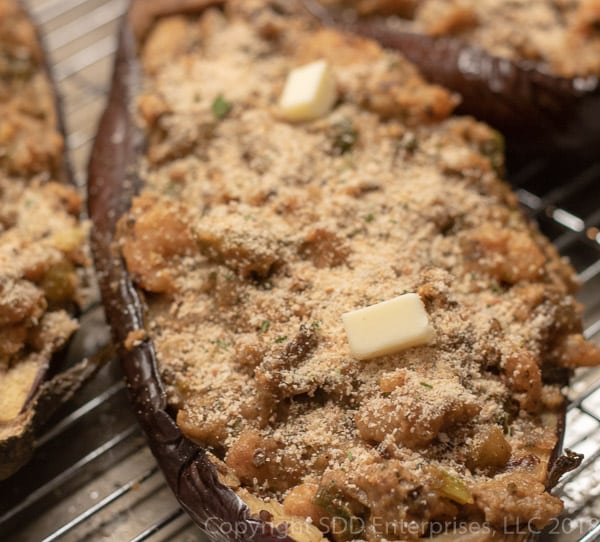 Ready for the Oven!

Place them on a prepared baking sheet and bake in the 350-degree oven until browning on top, 20 to 30 minutes. That’s all there is to it…simple as that!

Here are some similar recipes from Sweet Daddy D that you’ll love : 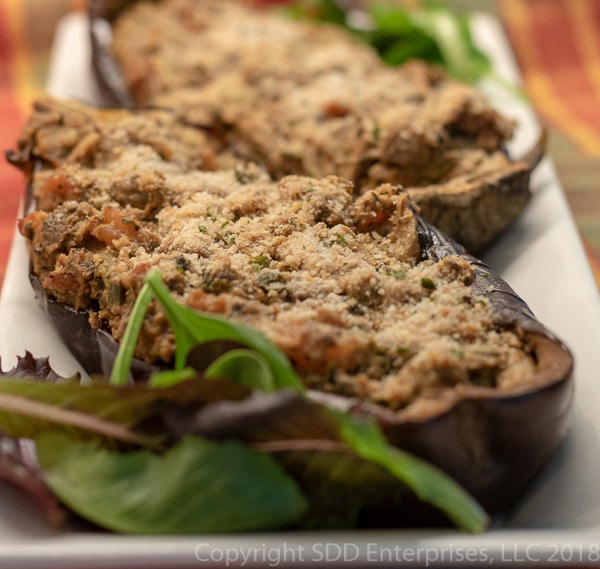 To prepare the eggplant

Use a purple (either Globe or Italian) eggplant for this recipe, and you could actually substitute zucchini with a slight change in the flavor profile. Slice the eggplant lengthwise through the center of the stem. With a sharp knife, cut a crosshatch in the meat. This will help get some  olive oil into the eggplant for baking.  The trick is not using too much olive oil-the eggplant will soak it up and all of a sudden you've got way too much olive oil. Just a nice little brush all over the cut side will do the trick. How long you'll need to smother the eggplant with the seasonings and the stock will depend on how tender the eggplant is to start. If you left it in the oven until it's very tender, it won't take long. If its a little tough or raw, it will take longer. Either way make sure to cook the eggplant until very tender before stuffing. Remember that most commercial creole seasonings have a high salt content, so make sure that you taste the stuffing before you add any more salt. 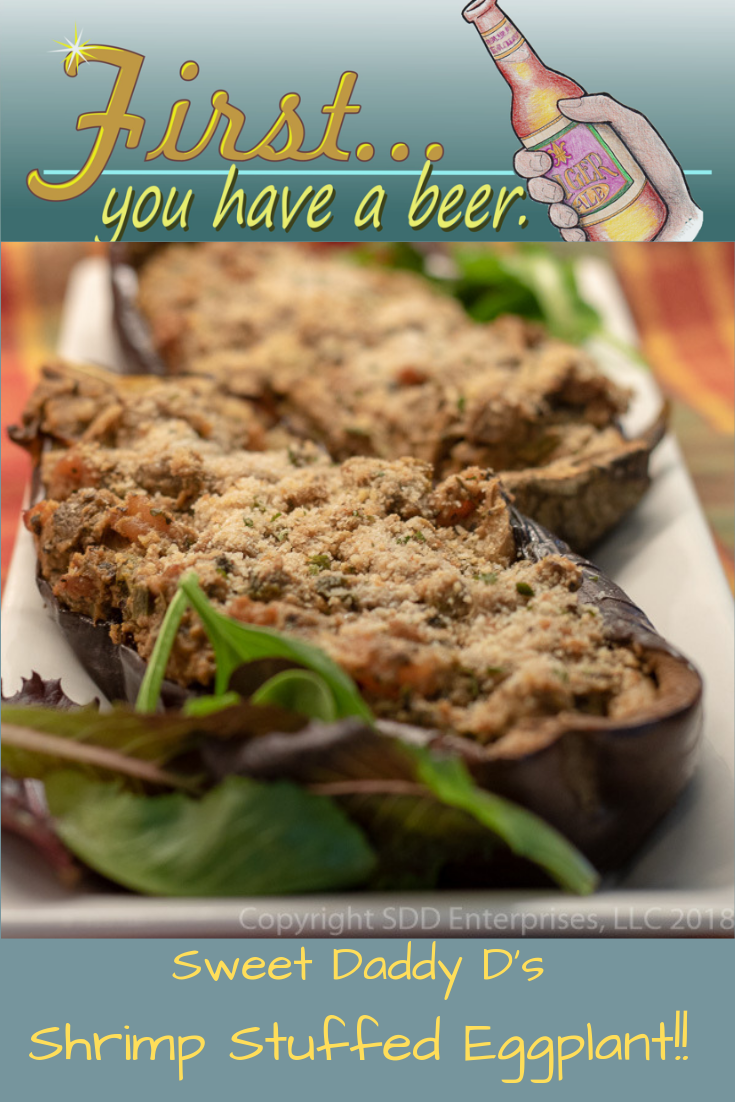 Check Out Some of My Most Shared Articles 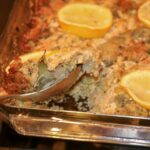 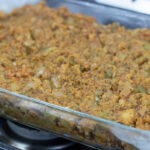 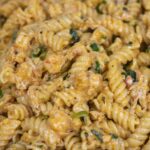 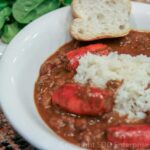 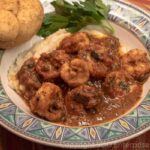 How to Make Cajun Shrimp and Cheesy Grits