Jambalaya, the name just sounds fun. This is a dish made for a crowd and shows off the best of South Louisiana cuisine. Here is Sweet Daddy D’s Creole Jambalaya, a savory concoction of smoked meats and shrimp with tomatoes, the Holy Trinity and rice all cooked together in a rich stock. The outcome is a homogeneous combination of flavors where no single ingredient dominates but all add to the symphony. It’s simple and delicious and definitely Creole.

Jambalaya, like the South Louisiana culture itself, is a merging of cuisines producing something larger than the sum of its parts. This rice dish combines elements of African and Spanish influences as well as French and Cajun experiences and methods. Dating back to the earliest settlers and slave communities, the name jambalaya comes from the French word for ham, “jambon” and the African word for rice, “ya”. Throw in the phrase “à la” which, in cooking, means cooked in a particular style or manner and you have the South Louisiana culture represented right on your plate.

Is Jambalaya Cajun or Creole?

The answer to this question is yes. The distinction between Cajun and Creole can sometimes be a little obscure, but jambalaya makes it simple...there is a Creole version and a Cajun version. Both versions are cooked in a similar fashion, but the ingredients and process develop flavors in a slightly different manner. Cajun Jambalaya, known as brown jambalaya, was developed in the swamps and prairies of southwest Louisiana by the Acadians and utilized methods and ingredients available to them. Creole Jambalaya, often called red jambalaya was an adaptation influenced by the methods and ingredients available to the Creole cooks in the port city of New Orleans. The major difference between the two versions is their appearance. Creole jambalaya contains tomatoes and sometimes shrimp and will have an orange or reddish appearance, while the more rustic Cajun jambalaya is brown in appearance, taking its hue from the browned meats.  The difference in ingredients and processes creates two distinctive flavors with subtle differences, which may characterize the subtle distinctions between Cajun and Creole cuisines-city cooking versus country cooking.

But guess what, it’s not that simple. Like most traditional Creole and Cajun dishes, there are as many recipes as there are cooks in South Louisiana.  Common Cajun Jambalaya ingredients include chicken, pork, pork sausage, ham and/or game, while the Creole variety may contain pork sausage, ham and shrimp and always tomatoes. But again, there is no limit to the ingredients a Cajun or Creole cook may use and a sure way to get in an argument in South Louisiana is to tell someone what they have to put in their gumbo or jambalaya. It wouldn’t surprise me if even this recipe draws someone ire, but let’s check out Sweet Daddy D’s Creole Jambalaya, I think you’ll like it!

Here are some things you'll use for this recipe:

First...you have a beer. I always find a jambalaya is fun to cook because it often involves a crowd or get-together of some sort. There are only nine ingredients plus the proteins and spices and everything goes together in one pot. Simple, but you will benefit from a little mise en place. Start out with a beer and while you sip, read the recipe completely, making sure you have all the ingredients and know what to do with them. If you are using fresh shrimp, you can use the shells to make Homemade Shrimp Stock which can be done days or weeks before. The cleaned shrimp, as well as the stock, can be kept in the refrigerator or freezer until you are ready to use them. When its time to cook, mix some Creole seasoning into the shrimp and set them back in the fridge until you are ready for them.

Slice the sausage and bacon and chop all the vegetables. The Trinity (that’s the yellow onions, bell peppers, and celery) can all be placed in a bowl together with the garlic and green onions in a separate bowl. Measure the rice and stock and open the cans of tomatoes and tomato sauce. We will use all the juice in the tomato can. Mix the Herb and Spice Blend and set it aside. Another sip or two of beer and you’re ready to go.

First-render the fats and caramelize the vegetables

Place a large Dutch oven over medium-high heat and fry the bacon until most of the fat has been rendered. This will take about 5 minutes. Leaving the bacon in the Dutch oven, add the sliced sausage and continue to fry until it’s fat is rendered, another 5 minutes, approximately.

Add the Trinity (yellow onions, bell peppers and celery) to the bacon and sausage and mix well to distribute the fat throughout the vegetables. Lower the heat slightly to medium and continue to cook the Trinity, stirring occasionally, until they begin to caramelize and brown a little on the edges. This should take about 15 minutes.

Add the tomatoes and the stock

Next, the whole tomatoes go in. Crush each tomato by hand as you add them, along with all the juice, to the vegetables and meats. Mix well and bring it to a heavy simmer for 5 minutes.

Add the tomato sauce and stock (have a little more stock on hand in case you need to add some later), mix well and bring everything to a boil. Reduce the heat to a heavy simmer, uncovered, for about 10 minutes while all the flavors get to know each other.

Add the Rice, then the Shrimp

Allow the pot to return to a boil, then reduce the heat to a low simmer. Cover the Dutch oven and let it simmer for 15 minutes. During this time, do not take the lid off the Dutch oven. After 15 minutes, remove the lid and give the pot a thorough stir. Add the shrimp a few at a time, stirring to combine the shrimp and rice completely.

Replace the lid and simmer for an additional 15 minutes (again, do not open the lid during this time). After 15 minutes, remove the lid and test the rice for doneness and seasoning. If the rice is cooked, the jambalaya is done. If the rice is still a little hard, replace the cover and simmer for up to an additional 10 minutes or until the rice is done. If more liquid is needed, add some of the reserved stock. Pay attention because you don’t want the rice overcooked and mushy. Add some or all of the reserved Herb and Spice Blend as needed. Once done, remove the Dutch oven from the heat and let it sit covered for another 5 minutes. Fluff it up, remove the bay leaves and you are ready to geaux!

That’s it, all there is to it.

What kind of rice should I use?

Do I need Andouille Sausage?

What if I can’t find fresh shrimp?

How long do Jambalaya leftovers last?

Is this the same as Shrimp Creole, Gumbo or other Cajun/Creole dishes?

Check out these other Cajun and Creole Recipes from Sweet Daddy D!

Take a look at these Cajun Jambalaya, Shrimp Creole and Dirty Rice recipes...try them all!

These items will help you with this recipe: 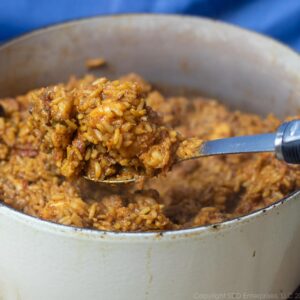 I commonly use parboiled rice, such as Uncle Ben’s Converted Rice, which cuts the cooking time slightly, but regular long grain rice is perfect for this recipe as well. Andouille sausage is a highly seasoned (that doesn’t mean it’s always spicy) coarse-grained smoked pork sausage very common in Cajun and Creole recipes. Any smoked sausage, like kielbasa can be substituted for the andouille but keep in mind that the andouille add’s a lot of flavors that other sausages do not.  In addition to smoked sausage, you can also add some smoked ham or tasso to the recipe. Homemade shrimp stock is perfect for this recipe and can be made with the shells of the fresh shrimp. If you do not have that, commercial seafood or chicken stock can be substituted. Fresh tomatoes can be substituted for the canned tomatoes. Make sure the tomatoes are very ripe and peel them by parboiling the tomatoes for a couple of minutes in boiling water. Use 2 cups of tomatoes.  Frozen shrimp are perfectly good in Creole Jambalaya. Make sure to thaw the shrimp in the refrigerator overnight and rinse before using. The shrimp do not have to be large. Medium or small shrimp will work if that's all you can find.  If you are buying fresh shrimp in the shell, buy more than 2 pounds to net 2 pounds of shrimp-the shells and heads add to the weight. As a rule of thumb, without heads, I would buy about 2 ¾ to 3 pounds, with heads, I buy about 4 pounds. You may end up with more shrimp than you need, but they freeze well and you could have worse problems.   Leftovers will last about 3 to 4 days in the refrigerator and should be stored in an airtight container. Reheat the Jambalaya in the microwave or on top of the stove. Add a little water to the saucepan and place over a medium heat, stirring occasionally until warmed through. Creole jambalaya does not freeze well because the rice will tend to get mushy. If you do freeze the leftover jambalaya make sure to use an airtight container or a vacuum sealer for best results.  If you want to cook this ahead of time, consider cooking up to the point just before you add the rice. Freeze the mixture in an airtight container and when you are ready to eat, thaw it in the refrigerator overnight, then bring it to a boil and add the rice and shrimp as the recipe directs.